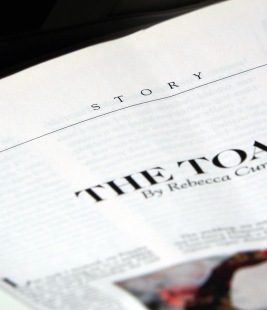 I am reading the “Story” sections in my Harper’s now.

I’ve been avoiding them for 2 years, because I was afraid they were too good, or too fictional, or both.

I have a hard time ‘switching’ to fiction. I am a news and information junkie, and fiction forces me into a state of mind that I find excruciating to contemplate, though I am fine once I succumb.

The effort to give myself up to fiction for several hours at a time is gargantuan, compared to the “yes-I-understand” effect of non-fiction. Why be afraid of someone else’s fiction being too good? Ask an aspiring writer of fiction.

But they – the Harper’s “Stories” — are, of course, good, and so is fiction as such, of course — a presentation of life re-formatted to make you think about it (life) at all.

The style of the times, according to my 25 unread Story-sections of Harper’s, is not fiery rhetoric or flowery description or symbolic stream-of-consciousness ‘stuff’, but equanimity. Maybe it is just my reaction that has become equanimous (with age), and the style of good short-story writing has always been without pyrotechnics of any kind. Of course, this is the case.

A good story is a cut of reality presented to one as a fresh serving of pork tenderloin transformed into a wondrous, succulent meal that one remembers forever, or at least its texture and flavour, if not every detail of the evening. The pyrotechnics of the grill are unseen by the ‘consumer’.

And the more horrible the subject matter, the more an equanimous writing attitude brings out the character and essence of the thing — the horribleness or beauty or wonder or boredom. Taste, sensitivity, and understanding (and empathy, placed here in parentheses for emphasis!) is what I am rediscovering reading my Harper’s “Stories”.

{Political part of post}: But then, what is the point of a Harper’s if the writing isn’t any good? That is like a United Kingdom (with or without Scotland) that is no longer democratic; or an America that doesn’t believe in freedom anymore. That’s simply “not on”, as the British say. (This is a blog about the ethic of western concepts of freedom, after all, so forgive the political intrusion). /{End of political part of post}

I remember a wonderful line from an interview given by C.G. Jung (inventor of the terms “introvert” and “extravert”) cited in a collection included in his vast Collected Works entitled C.G Jung Speaking, where, in a rare moment of what might be interpreted as self-promotion, Jung addresses the interviewer’s question about his influence in French-speaking Switzerland by recounting an encounter with a man in the street who recognized Jung.

(The French are notoriously not followers of psychological discovery [my opinion]; Jung was from the German part of Switzerland, the language of Freud (who was Austrian)).

The street was in Geneva, the capitol of French-speaking Switzerland. The man recognized Jung, stopped dead in his tracks, and said:

Are you the one who writes those books? Those are not books. That is bread.