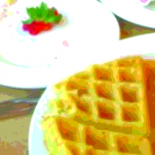 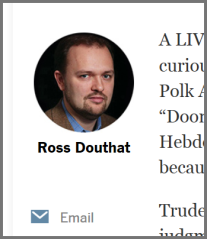 This post will resonate mainly with those who are avid readers of the New York Times and, perhaps, with those who encounter the columns of Ross Douthat in that newspaper.

Mr. Douthat is among a dozen columnists writing for the NYT. He is there to offer balance against most of those other columnists, whose political views lean mostly left.

Rather than a true conservative viewpoint, however, Mr. Douthat seems to demonstrate instead what I would call “conservatist contrarianism”.

Fair enough. This attempt by the NYT at balance is certainly not being copied at Fox or even the Wall Street Journal.

Mr. Douthat is not a fan of President Obama (which is not a sin anymore), while he has striven to make sense of a GOP that he nevertheless does not hold responsible for the perception of the United States as a country with a dysfunctional political system; a party singularly responsible for the tragic beating that America’s standing has suffered as a result of the extremist rightist positions adopted by the GOP in the last decade.

Making sense of something as nonsensical as today’s “American Right” is a tough task for any columnist, especially one writing for the left-leaning NYT. But, that is Mr. Douthat’s job. More often than not, however, he has given up making sense altogether of the GOP for us mere mortals and now fulfils his function as resident NYT right-winger by criticizing the Obama administration on what the parliamentarians of my country (Canada; sorry) — and of the rest of the Commonwealth of Nations — would refer to as “points of order“.

Again, fair enough. Order is important, for any government, anywhere.

But, Mr. Douthat is struggling with this.

From his latest column, this quotation:

“[W]e have this much in common with Putin: We, too, see advantages in managing conflicts, intervening just so far and no further …. We need a foreign policy argument to clarify which wars must be, or even can be, won.”

Simply, no. We don’t. Because we can’t. And this should be obvious to Mr. Douthat, but it isn’t.

The US needs a foreign policy that clarifies why it does what it does. But to expect it to predict which conflicts it can win is simple-minded in 2015. It couldn’t do it in the 1960s with Vietnam. How can it do it today with … take your pick of conflicts?

What is the issue here, exactly? That America is involved in conflicts that it cannot win and so can only hope to manage to her advantage? And by that she is equated with the utterly anti-occidental sovietist leader of the Russian Federation?

Well, since it cannot win these conflicts outright, because Mr. Putin makes that difficult with, among other weapons, his significant veto on the UN Security Council; then — duh — America must do what it’s doing: manage conflict as best as she can.

Yawn… Anything else on Mr. Douthat’s mind?

But enough about this one column. One reason to look at Mr. Douthat’s columns only grudgingly if at all, and decidedly not with the anticipation of the columns of Roger Cohen, Maureen Dowd, David Brooks, and Timothy Egan — week in and week out — is this: he has a way of stating the obvious that his colleagues might do with creativity and a certain further insight gained from an experience of the world that has so far eluded Ross. That’s as ad hominem as I’ll get, don’t worry.

Or, maybe not. Because Mr. Douthat needs to have a philosophical position that goes beyond a nit-picky foray that succeeds only to demonstrate an intellectualist pseudo-seriousness. If Ross Douthat believes that he follows in the footsteps of an intellectual of great seriousness who is worthy of claiming that he is a conservative — William F. Buckley, Jr., say — then, again, no.

One gets the sense that Ross seems to have never really ventured beyond a worldview shaped by a college political-science reading list, and a dubious debating-club talent for arguing what’s not quite relevant after you reach a certain age. I am not Bill Buckley, either. But I’m older than Ross and know that you need to take a stand that doesn’t borrow from the extremes while ignoring the middle; there, where the thing that makes the most sense to most people lies obvious and waiting.

Meaning, don’t blame your government for not achieving the impossible, as this just does the bidding of the GOP without clarifying anything from an intellectually conservative viewpoint not precluding humanistic maturity (as Buckley demonstrated best, of all conservatives).

And so, then, what should America do if Mr. Putin makes things so difficult? Mr. Douthat has no answer.

But, luckily, others do.

Friedman, please! What do you think? That’s better, old guy…

These things do matter, I’m afraid.