The Witch Is Dead 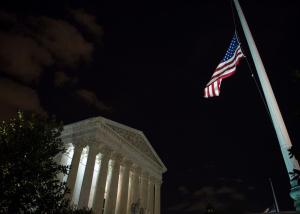 Antonin Scalia died yesterday and it is a shock. It is a tragedy for his family and a sad thing in general, when a person of stature well-deserved passes away.

It is also a time for reflecting upon the positions that Mr. Scalia took during his long tenure as a US Supreme Court Justice.

The media is full of excerpts from his majority and minority decisions and dissents, and so it is possible to get a pretty good sense, very quickly, of Mr. Scalia’s attitudes, if not yet of his enduring influence on American jurisprudence.

If Mr. Scalia’s opinions defined the tenor of the conservative wing of the US Supreme Court, then I would hope that fascination by and veneration of his opinions, for their supposed “clarity” filled with “acerbic wit”, etc., etc., will not last in time.

I am not a lawyer; I am an engineer, and so I am used to a certain clarity. I know what clarity looks like on the page and what it sounds like in speech, through life-long exposure to the definitions of complex things and processes. Almost all of what I have read from Mr. Scalia’s excerpts that purports to bring clarity in dissent (usually) I find contains so much showy gibberish that the reputation for clear-headedness strikes me as not deserved. There. I’ve said it.

As well as being an engineer who looks at things with a structured mindset, I tend to look at situations also from a psychological perspective that allows for illogical things to happen that have no obvious reason for happening, except when applying that 6th-sense of psychological insight, as opposed to the limiting vision of logic alone.

Antonin Scalia, as well as being a justice of the Supreme Court, was also a devout Catholic with 9 children. Reading Mr. Scalia’s opinions on the legality (as opposed to the application of justice?) of same-sex marriage – that it is not up to the court to decide law purely in a manner that acknowledges a change in public opinion, when that decision does not give guidance to lower courts on how to apply the new reasoning – reads to me as code for a defense of tradition, in this case an obviously Catholic one.

In engineering, there is a lot of code. The code is meant to do things. But that code itself is not the thing; it remains hidden. Most people don’t know that their microwave oven is controlled by code written by an engineer. If you live with that appliance long enough, you will eventually see the pattern of that engineer’s code in the appliance’s operation, especially when you try to do something with that appliance that it wasn’t coded to do. The code, at that point, will betray itself.

So to be an originalist, as Mr. Scalia was called, is simply code for being a traditionalist. A mind as rarefied as Mr. Scalia’s might prefer the $40-word to the 50-cent generic. But they mean the same thing and can make the job of Supreme Court Justice a rote affair where the law will rarely change but can always be “clarified”, according to code written over two centuries ago that only a Supreme Court Justice understands for its original intent.

That is quite a responsibility, and quite a trust to put into anyone who claims to have the clarity of understanding of that age-old intent.

In this excerpt, taken from here, one can imagine a dissent written 150 years ago that could remain otherwise unaltered and still be just as “clear” and “originalist” in defending slavery, by simply replacing the word “marriage” with the word “slavery”.

In that excerpt one can, in fact, see the coded template for every dissent imaginable that defends against moving beyond the supposedly definitive understanding of what the composers of the US Constitution “meant” when that Constitution was written and amended.

I suppose there needs to be a force on the Supreme Court that defends the supposed sanctity of the meaning of the Constitution, and to defend the law from being changed upon the whims of the common people, rather than for reasons of logic and reason. Mr. Scalia himself rightly declared that it is part of what defines a democracy to have that discussion with differences of opinion. But Mr. Scalia’s opinion was not just anyone’s opinion.

Anyone who performs that role should be assessed as playing that role with, by definition, a limited function, like the code in that microwave oven. There is very little that would function today, in a technological sense, using the science that existed 200 years ago. Just how “originalist” should a Supreme Court Justice be when that is all the code available to him/her to determine what is not only legal but just in 2016?

The evolving answer to that question will be what determines Mr. Scalia’s true legacy.

This entry was posted on February 14, 2016 by tinypriest in Politics, Society and tagged Antonin Scalia, Democracy, Jurisprudence, Originalist, Same-Sex Marriage, US Constitution.